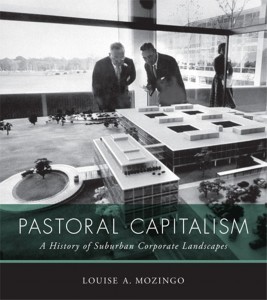 Who can stand the city? It’s all noise, dirt, and hassles. In 1942, the Bell Labs division of American Telephone & Telegraph Co. declared it had had enough and was relocating to the suburbs. Over a few decades, this path-breaking move would set off a corporate stampede.

Purchasing 213 acres of rural land in Union County, New Jersey, the AT&T unit hired the architectural firm of Voorhies, Walker, Foley, and Smith, along with the renowned landscape architecture firm of Olmsted Brothers, to design what would be the U.S.’ first true corporate campus. The corporation rationalized the move by saying that employees were increasingly repelled by the area around its lower Manhattan offices. Moreover, Bell Labs said, vibrations and electrical interference made research work in urban settings a challenge. Better to have the placid and sylvan surroundings available only 25 miles away, in the area near Summit, N.J.

The rationale would be much repeated in years to come, as one corporation after another—including notably, General Foods, General Motors, Connecticut General Life Insurance, Deere & Co., and General Electric–removed to similar pastoral locations.

But by 1988, long after the quiet corporate exodus had become a mad dash, a reconsideration of the companies’ logic was overdue. William H. Whyte–a former editor at Fortune who’d become well-known first for his book probing corporate mores, The Organization Man, and later for his investigations of urban life–considered the business-relocation trend in his book City: Rediscovering the Center. Corporate campuses, he declared, were employee-unfriendly and pharaonic manifestations of the sprawl-inducing “car culture.” Many were fortress-like, as if intended to discourage visitors, and all were inhospitable to the “unplanned, informal encounters” upon which spontaneous creativity depended. Most significantly, he charged that the relocations were not motivated by workforce wishes: Rather, the true reason for the removal of corporate headquarters to such campuses was their proximity to CEOs’ homes, which in every case proved to be no more than 20 minutes away.

Enough said, one might think, writing off the entire trend as a part of the deluded and self-defeating post-War suburbanization impulse. And anyway, with visionaries as Richard Florida today celebrating urban revitalization and the accompanying desire of the hip, young, and tech-savvy to live and labor in such areas as New York’s DUMBO or San Francisco’s Mission district, isn’t the day of the suburban corporate outpost all but done?

Well, hardly: Only a year ago, Google announced it would be building a new, 1.2 million-square-foot corporate campus on NASA’s Ames, Calif., base. And earlier this year, Facebook announced it would take over and refurbish the former Oracle-Sun Microsystems campus in Menlo Park, Calif. Pastoral development, it seems, is alive and well in the 21st century.

An insightful, comprehensive guide to the suburbanization of Corporate America can be found in Louise A. Mozingo’s just-published Pastoral Capitalism: A History of Suburban Corporate Landscapes (MIT Press). The author, a professor of landscape architecture at the University of California at Berkeley, has dug deeply into the historical record and provided a handy categorization of the widely varying corporate projects. One shortcoming: She’s sometimes too accepting of companies’ justifications for the relocations, often repeating organizational puffery about just how delighted employees were with their leafy new surroundings. Moreover, Mozingo is an all-but-slavish devotee of what might be termed the gospel of Alfred D. Chandler, Jr., the Harvard Business School professor whose works declared the triumph of meritocratic “managerial capitalism” over outmoded, family-centered enterprise. Surely, the exacting, scientific outlook of such ideal executives could never be subverted by mere fads or the self-serving ploys of upper management!

Mozingo discerns three distinct traditions in the corporate exodus: research campuses, corporate estates, and office parks. The research campus as pioneered by Bell Labs, GE, Johns-Manville, and GM, led the way. Recruitment of skilled researchers and technicians away from universities seemed to require construction of similar facilities: a bucolic university ambiance complete with, in Bell Labs terms, “an atmosphere of freedom and an environment stimulating to scholarship and scientific research interest.”  Indeed, judging from photographs, the three-story Bell Labs complex with its Princeton-stone exteriors, shaded lawns, courtyards, and ample windows, does seem to make for an appealing environment.  Less alluring today is the futuristic, World’s Fair-glitzy General Motors Technical Center, erected near Detroit in 1956 under the guidance of architects Eliel and Eero Saarinen. Hyped as a “historic symbol of today’s industrial progress, also of tomorrow’s ambition,” the 25-building home to the carmaker’s engineering, styling, and product-development departments would be a natural fit for the likes of George Jetson.

It was perhaps only a small step from such think-tanks to the construction of what the author terms “corporate estates”—the lavish suburban corporate headquarters that appeared in increasing numbers during the 1960s. Low-rise, modernist edifices set on at least 200 acres and equipped with grand entry drives, prominent lakes and fountains, opulent gardens, and all-but-invisible parking lots, these complexes were thought to be appropriate for what one architectural journalist called “the Medici of our time.” The prototypes for such developments included General Foods’ headquarters near White Plains, N.Y.; Connecticut General Life Insurance’s offices in Bloomfield, Conn.; and the Saarinen-designed Deere & Co. Administrative Center in Moline, Ill. The author terms the last of these “the definitive estate,” taking note of its many architectural awards and of the way in which it won over diverse audiences, from cultural critics and hard-headed capitalists to wary employees and area farmers.

The stepchildren of the corporate-development trend were the office parks that speculative developers began building in the 1950s. These would first house lower management and the vast numbers of clerical workers that businesses required for record-keeping and providing services to far-flung customers. (Office parks were modeled on the factory-filled industrial parks that, for want of urban space, began emerging in the 1920s.) Soon, office parks would come to include such celebrated high-tech outposts as the Boston-area’s Route 128 research parks and North Carolina’s Research Triangle Park, a product of a Duke-University of North Carolina-North Carolina State consortium. Less-worthy office parks proliferated through the 1980s and ‘90s, many extending over hundreds of acres.

In recent years, the distinction among these types of developments has been breaking down, the author points out. Microsoft, for example, first leased buildings in a Bellevue, Wash., office park, then bought existing structures and built new ones, eventually occupying an area of 10 million square feet. Effectively, Microsoft has built “an estate-scale campus on the installment plan.” Google’s famous campus, too, is a hybrid: “a corporate campus abandoned by its original occupants [Silicon Graphics], reused as a suburban corporate headquarters within an office park.”

Another recent development: the globalization of suburban-office developments, beginning in the 1970s. England, France, Australia, Ireland, South Africa, and India all sport a variety of office parks and corporate campuses. This means, oddly enough, that developments across the planet “look the way they do because of the preferences and prejudices of postwar American corporate leaders, thoroughly steeped in a deep cultural fount of pastoral ideology.”

But all is not to the good, Mozingo concludes: Once corporations moved away from urban centers, they lost all incentive to agitate for cleaner, better cities. “The separatist enclave of corporate management in the suburbs” frees executives from any such concerns. Moreover, she asserts, the prettified corporate landscapes operate as a salve on the bruised body politic: They “suspend our lurking misgivings about the avid purveyors of global capitalism with a steadying pastoral sheen.” Should PepsiCo, for example, be pushed to become a better corporate citizen? Why, that company has a vast, 122-acre park just north of New York City, where members of the public can wander about, marveling at exotic trees and grasses and celebrated works of art by the likes of Alexander Calder, Henry Moore, and Isamu Noguchi. It’s the perfect tonic to take your mind off of the global economic meltdown.