What is it that makes the iPod so cool? Simplicity, right? That and 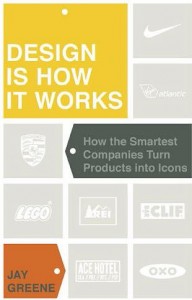 portability. And functionality. All are ingredients of great design.

It was attributes like these that were championed by designers of the early-20th century Bauhaus movement. But as former BusinessWeek writer Jay Greene reveals in his Design Is How It Works: How the Smartest Companies Turn Products into Icons (Portfolio, $25.95), today there’s a lot more to it. Now, the smartest designs address needs that consumers didn’t even know they had. Moreover, those ubiquitous iPods and iPhones, as one Seattle designer tells Greene, are not merely products that other companies can imitate. They are manifestations of Apple’s corporate culture, where design isn’t just an add-on but a fundamental consideration at every stage of the process.

Greene (no relation to yours truly) considers design at a number of corporate path breakers: Porsche, Nike, LEGO, Virgin Atlantic, and more. One of the most interesting to me is OXO, a maker of design-centric kitchenware including a much –imitated vegetable peeler with a fat, industrial-rubber handle.

OXO’s wares are a prime example of addressing needs that cooks didn’t know they had. Once everyone bought cheap veggie peelers at the supermarket and accepted the fact that they were unwieldy and a pain to use. OXO founder Sam Farber witnessed his wife struggling with a peeler as she labored over an apple tart. Shortly thereafter, he called Davin Stowell, a founder of New York firm Smart Design, which before long was rethinking a number of kitchen standards. Their better peeler’s fat handle decreased hand strain – and its blade was sharp. OXO would become the manufacturer of the peeler, along with some 800 other products including an angled and easy-to-read measuring cup. The company’s approach, which stresses intuition over market research, can increase product-development costs fivefold. That leaves OXO charging a premium for its stuff. But the company has prospered even through the recession: In 2010, its sales jumped 13%, to $203.6 million.

Company president Alex Lee, a graduate of New York’s Parsons School of Design, offers a key insight about OXO’s process. “People here are looking for problems all the time,” he tells Greene. “Our process is finding a pet peeve. If there’s no pet peeve, there’s no product.” But many of these aggravations are annoyances that consumers just put up with, as if there were no imaginable fix. It turns out that, beyond every wrinkled consumer brow, there’s a Eureka moment waiting to happen.

In 1956, Fortune magazine writer William H. Whyte published The Organization Man, a compilation of several years’ worth of reflections on white-collar work and corporate life. The book created a sensation and became a best-seller. Its thesis: The individualistic Protestant Ethic, which had defined the terms of work and upward mobility in the United States for decades, was being replaced by a new “social ethic,” which emphasized the group over the individual and stressed “belongingness” as the ultimate need of each person.

The “organization man” as Whyte saw him was most clearly glimpsed in the ranks of recent college graduates, whom he termed “a generation of bureaucrats.” What did they want? To pull themselves up by their own bootstraps? Success and wealth? Independence? No, their great desire was for security – to sign on to an organization for life, much as medieval monks had pledged themselves to the Catholic Church. Corporations’ hiring and promotion practices reinforced the sentiment: At General Electric, Whyte observed, programs for trainees focused not on an individual’s abilities but on the question “how well does he fit in?”

Many observers had taken note of the 1950s trend toward conformism and playing it safe, which contrasted strongly with the radicalism, risk-taking, and downright heroism of the immediately preceding decades. But Whyte’s analysis offered a deeper understanding, and indictment, of the period – and of what he believed to be a permanent shift in American culture. 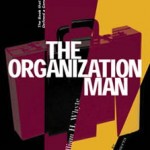 television series Mad Men, which is about to begin its fourth season on cable channel AMC.  Fictional advertising man Donald Draper and his colleagues, after all, are beamed to us from the early 1960s – just four years down the road from the publication of The Organization Man.

In many ways, Mad Men’s ad agency, Sterling Cooper, does not jibe with Whyte’s analysis. For example, Draper, Roger Sterling, Pete Campbell, and the others at the firm aren’t exactly into “belongingness”; their world is more like a shark tank in which slow swimmers and other unfortunates perish on a regular basis. Art director Salvatore Romano is purged because of his homosexuality, while copywriter Freddie Rumsen is forced out because he can’t hold his liquor. Such figures go down alone, with almost no support from their colleagues.

However, The Organization Man and Mad Men are in agreement on some profound matters.  “The great packaged suburbs that have sprung up outside our cities since the war,” Whyte observes, are communities made in the image of the young Organization Man. More than anything else, he continued, they expressed the “rootlessness” that was key to such men’s experience. “Almost by definition,” he wrote, “the organization man is a man who left home and…kept on going.” Nor were they able ever to go home – because home was itself vastly transformed.

That’s Don Draper in a nutshell. The onetime Pennsylvania farm boy turned California auto salesman turned New York adman is rootlessness personified. Whyte had in mind the corporate functionaries who were regularly transferred by their companies from town to town: Long-distance moving companies reported that 40% to 50% of their clients were such corporate transferees.  Although not a member of this group, Draper has caught their wave. His two-story, Ossining home complete with pert blonde wife (herself a transplant) and 2.5 children completes the profile.

Whyte also perceived that, far from becoming a class-bound society, America was becoming ever more dynamic. “The routes to advancement are not closing down, our classes are not freezing; quite the opposite, there have never been so many people moving in so many different ways,” he wrote. “As the middle class has expanded, the hereditary advantages of the upper strata have declined drastically.”

Once again, that’s Don Draper all over. He may have had to adopt a fake identity to make it happen, but his adland achievements are due not to family connections or status, but to his native abilities.  After all, only a very slick operator could persuade a tobacco company that “It’s toasted” represents a worthy advertising slogan.

Summmertime is the right time for paperbacks—but many of the hottest financial-crisis volumes are staying in hardback for a while longer. For example, Andrew Ross Sorkin’s 600-page Too Big to Fail: The Inside Story of How Wall Street and Washington Fought to Save the Financial System – and Themselves won’t be out in paper until September. Is the would-be business-book reader condemned to tote around a hardback brick through the dog days?

No—there are still a good many quality paperback reads around, many of relatively recent vintage. Here is a list of some of the most interesting.

If it’s financial-meltdown analysis you want, one of the best volumes is financial writer William D. Cohan’s House of Cards: A Tale of Hubris and Wretched Excess on Wall Street (Vintage, $16.95). Cohan documents how Bear Stearns, once the Street’s preeminent bond shop, imploded and had to sell itself to JPMorgan Chase for a song. Although the firm had ridden the housing boom with arcane mortgage-backed securities, its executives were largely oblivious of their exposure to the toxic stuff, according to Cohan. “Bear earned billions setting the stage for the world to lose trillions,” in the words of Bloomberg BusinessWeek’s Roben Farzad.

What could be more timely than a book about oil? For a highly readable narrative of Lone Star state gushers and the moguls they made, take a look at The Big Rich: The Rise and Fall of the Greatest Texas Oil Fortunes (Penguin, $16). Here are the tales of Roy Cullen, Clint Murchison, Sid Richardson, and H.L. Hunt. Author Bryan Burrough offers particularly compelling accounts of Cullen, the fifth-grade dropout who became the richest man in the U.S., and Hunt, the onetime professional poker player who gained fame bankrolling right-wing political causes. All benefited from what the author calls “among the greatest periods of wealth creation in American history.”

Another fascinating business profile is The King of Madison Avenue: David Ogilvy and the Making of Modern Advertising (Palgrave Macmillan, $18), by former ad man Kenneth Roman. The legendary figure behind Ogilvy & Mather drew many key life lessons from the odd jobs (sous-chef, door-to-door salesman) that he performed in his twenties. These contrasted sharply with his late-life baronial lifestyle. Ogilvy is best remembered for his ad coups for Hathaway shirts, Schweppes mixers, and many more.

Layoffs and the recession have many readers wondering if they should give up on the rat race. For philosophical musings on the world of work, along with a close-up look at occupations from tuna fishing to rocket science, there’s Alain De Botton’s The Pleasures and Sorrows of Work (Vintage, $15.95) “When does a job feel meaningful?” he asks. “Whenever it allows us to generate delight or reduce suffering in others.” The author finds both humor and grief in our labors.

Finally, for some historical perspective on the financial mess – and on current demands that we MUST BALANCE THE FEDERAL BUDGET! –consider the Pulitzer Prize-winning The Lords of Finance: The Bankers Who Broke the World by money manager Liaquat Ahamed (Penguin, $18). This is an account of how 1920s central bankers’ decisions played a part in ushering in the Great Depression. An inflexible attachment to the gold standard and to prevailing economic orthodoxy were key to the debacle, as was the inflationary financing of World War I. It’s an absorbing cautionary tale about how when the big crisis looms, out-of-the-box thinking is a must.

Are there other recently published business-book paperbacks that you think should be added to this list? Please let me know if you come up with other titles.